beyond
the
surface
exposed

Beyond the surface.exposed is the product of the PhD thesis On Holes: Finding political holes in the urban fabric by Joanne Choueiri  at Griffith University supervised by Prof. Karine Dupré and Dr. Zuzana Kovar.

Beyond the surface exposes ‘political holes’ in the urban fabric of cities and organizes them into an archive.
Political holes are considered to be physical and psychological holes that manifest through the illegal and/or unethical demolition of buildings conducted by endogenous political actors. The deliberate, large-scale demolitions are known as an urbicide. The use of the term urbicide1 was revived by lecturer in international politics Martin Coward (2009) to denote any genocide that is aimed at buildings and urban space.2 The global destruction of buildings, monuments and cultural heritage during wartime for ethnic cleansing,3 or militarization of the city, 4 as a form of genocide on the built environment could be situated in many contexts most recently: Palestinian/Israeli war,5 ISIS destruction of Syrian and Iraqi heritage sites.6 While the reasons behind urbicide can be attributed to war, gentrification, or militarization of the city, this research proposes the notion of ‘political holes’ as another form of violence.
Drawing from the two-fold meaning of a hole: a physical perforation and an absence or missing, political holes are physical and psychological holes that appear in the urban fabric. The physical hole is a “disturbance”7 , “made out of space, with a defined outline”8, also denoted as a “superficial particular”9 by philosophers Casati and Varzi (1994) (fig.1). 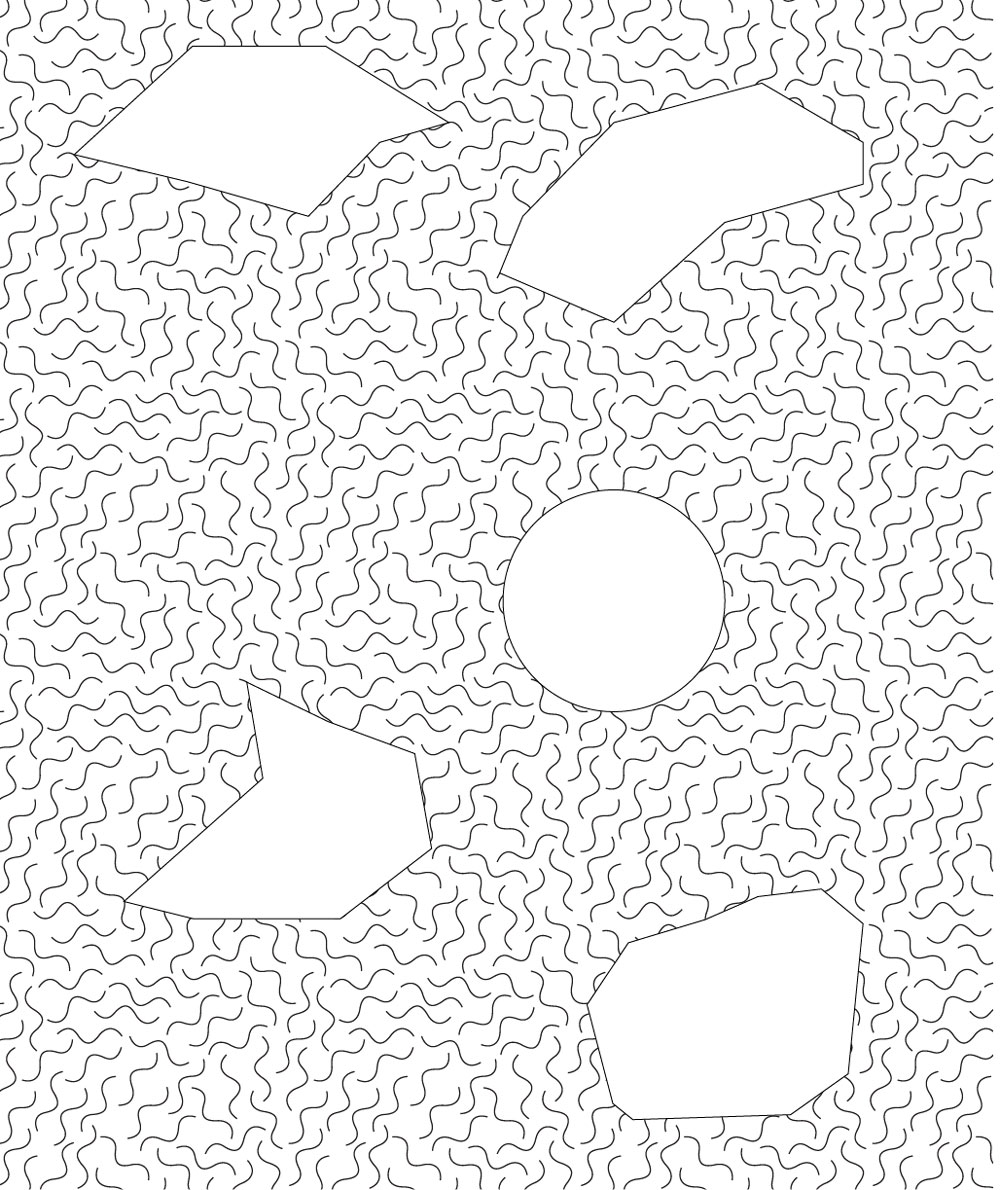 1: Representation of holes according to Casati and Varzi. Diagram by author, 2021.

The psychological hole is based on Maurice Halbwach’s study on collective memory where he stated:
Any inhabitant for whom these old walls, rundown homes, and obscure passageways create a little universe, who has many remembrances fastened to these images now obliterated forever, feels a whole part of himself dying with these things and regrets they could not last at least for this lifetime.10
The psychological hole then is associated with the memories of the people Halbwachs’ evocation of this occurrence as “parts of himself dying with these things” identified the gravity of a building’s death and the underlying emotional attachment to it. 11 Thus, the physical hole-making experience of destruction leads to a psychological hole of loss and triggers grievances towards the past city.
Political holes manifest as ‘empty’ pieces of land with a memory of the past demolished building contained in the generation of residents that have witnessed these demolitions. Based on Van Gennep (1960) and Turner’s (1969) ‘liminality’, political holes are in an in-between state between the past as the demolition phase, and the future as an incorporated phase in the city. They occupy a space and timeline in the city that remains
To document these holes, archival research, mapping strategies namely physical and digital mapping, walking practices and interviewing methods (fig.2) were used.  The ambiguous, material, and ephemeral political holes are therefore, seen, mapped, and given presence in the city. They are then uncovered not as mere empty lots but as traces of a history of urbicide having a particular lifespan: a temporality that manifests through their changing physicality, and instances of functionality. 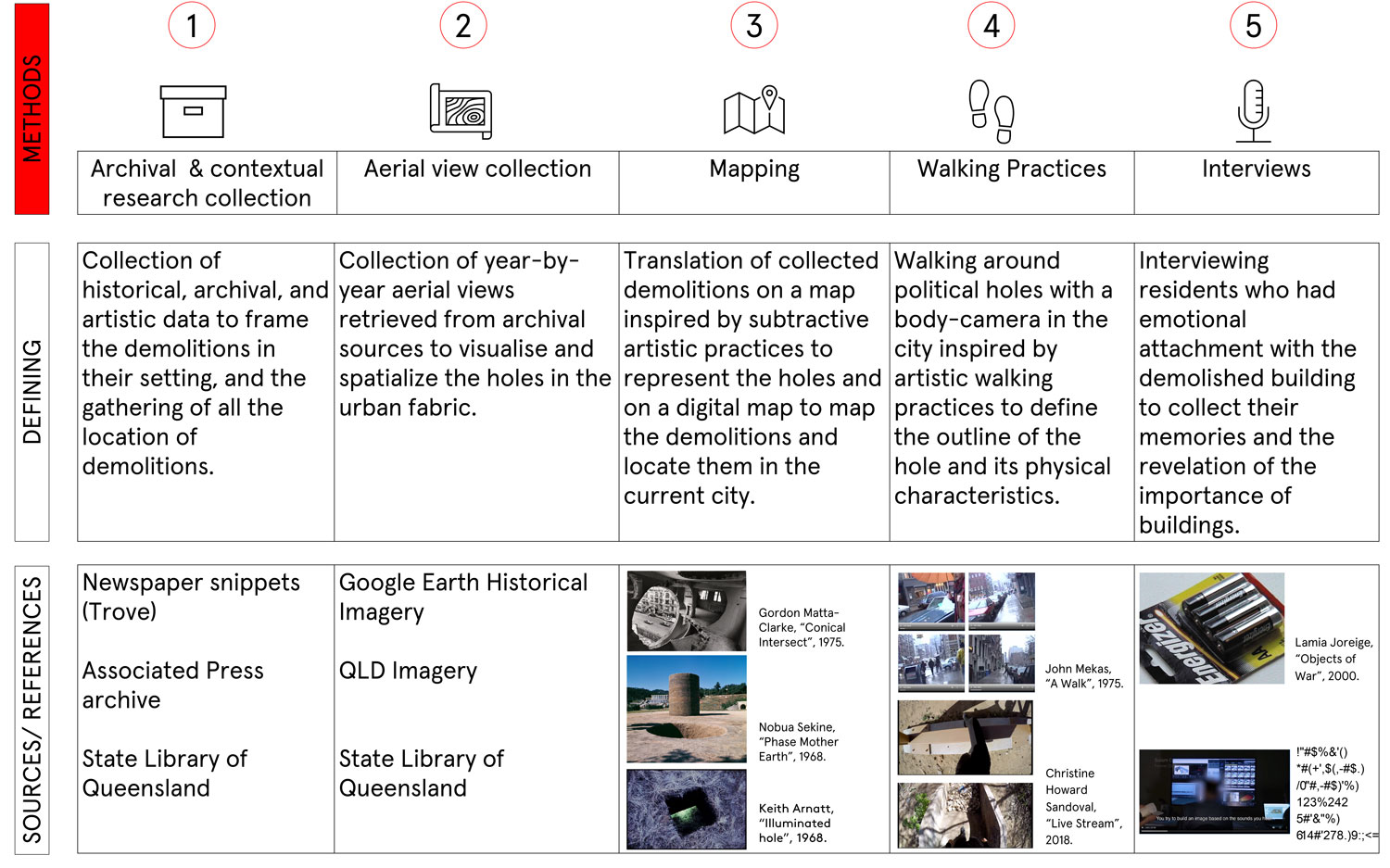 Their accumulation, collection, analysis, and classification into a final archive through this website proposes a new reading of the city that seeks to question the architectural archive processes and the built contents of these archives, while unveiling the hidden stigma of spatial violence.

10 Maurice Halbwachs, “Space and the collective memory.” In On Collective Memory. Translated by Lewis A.  Coser, in Heritage of Sociology Series  (Chicago: University of Chicago, 1992), 2.